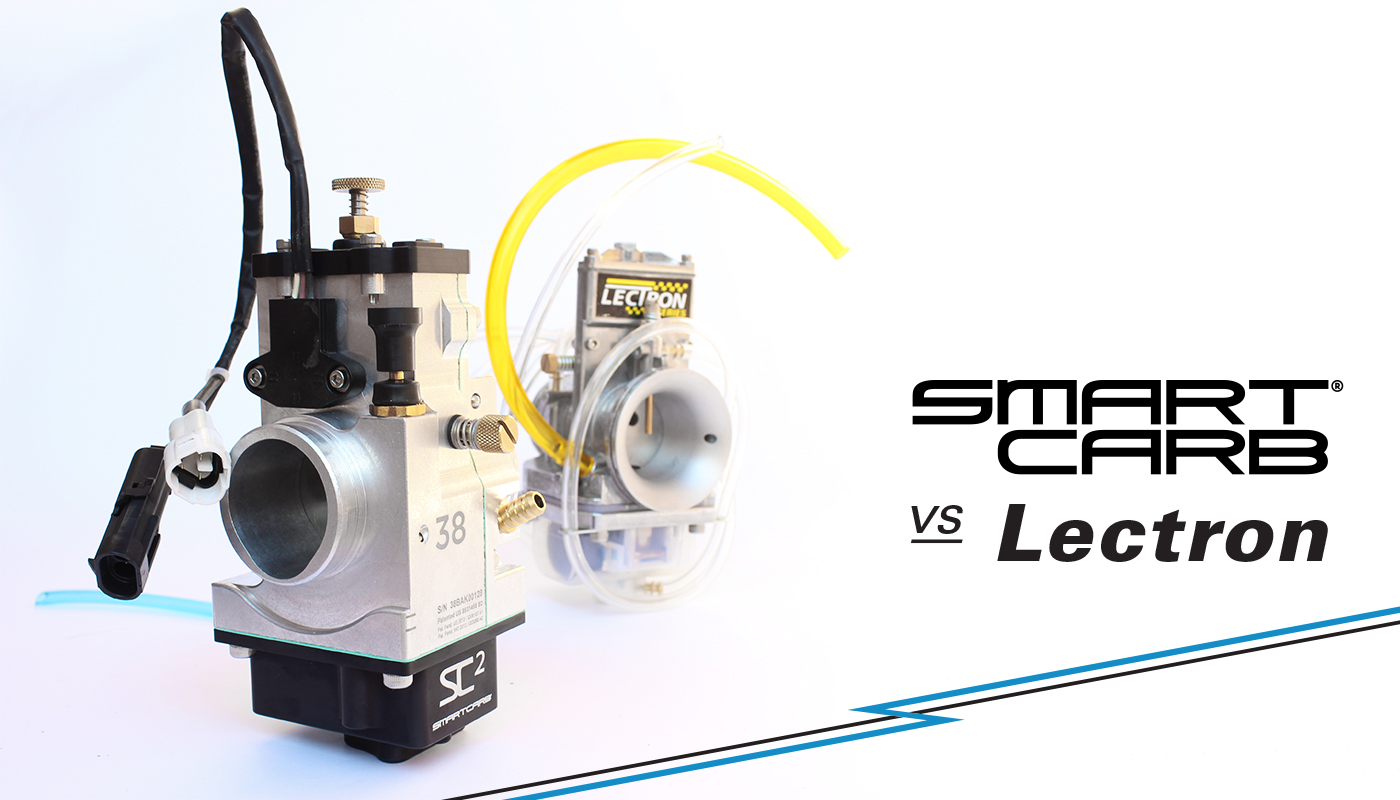 How do they compare?

We get this question a lot. Both the SmartCarb® carburetor (SmartCarb®) and the Lectron® carburetor use metering rods in lieu of jets and needles, and both manufacturers make similar claims in terms of performance, air density compensation, and ease of use. Understanding how they compare is the first step to making an informed decision on which one is right for you. In this article we’ll cover a bit of the history of both products and then provide an objective comparison.

Disclosure: Lectron® is a registered trademark of Lectron, LLC and is used herein without permission. Lectron, LLC and Lectron® carburetors are not, and have never been, affiliated with SmartCarb Fuel Systems, Inc or the SmartCarb® brand of products.

First a little background. The history and heritage of the flat slide, metering rod style carburetor is one shared by both the SmartCarb® and the Lectron® carburetors. Their founding design principles were developed by the same original inventor: the late, renowned carburetion expert William “Red” Edmonston. Red first pioneered the metering rod carburetor concept with the unique Posa-Fuel and Lake Injector in 1967 and 1971 respectfully. Based largely on Red’s designs, the Lectron® carburetor came to market in 1974 and represented a major leap forward for motorcycle carburetor technology with the addition of a float bowl and the use of a flat slide for throttling rather than the cigar cutter or guillotine style sliding venturi from before. After General Motors acquired Lectron Products, Inc in 1978, Red went on to further develop and refine the metering rod style carburetor, culminating with the SmartCarb® in the early 2000s. SmartCarb Fuel Systems Chief Technology Officer Corey Dyess had the privilege of working with Red during his final years and has led advanced development of the SmartCarb® since then, winning multiple patents for feature improvements over time.

Nope! While both carbs use a metering rod and a flat slide to provide precise air/fuel mixture control and superior fuel atomization to that of conventional needle and jet carburetors, there are more differences between the two than are readily apparent.

Always looking to do things better, Red, and more recently SmartCarb Fuel Systems, have evolved the metering rod carburetor concept over time by adding improvements and features to enhance the basic operating principles of the technology while also addressing the shortfalls and limitations of prior designs. The result is a fuel system that is substantially different from its predecessors, including the Lectron® carburetor.

Like most conventional carburetors, the Lectron® carburetor uses a circular venturi shape. The SmartCarb® does not. Instead, it uses a patented “inverted egg” or “keyhole” venturi shape. The thinking here is not unlike what backyard mechanics have been doing for years by oval/offset boring conventional carburetors – that is to change the rate of throttle opening through the throttle range. SmartCarb Fuel Systems takes it further by algorithmically determining optimum venturi shape, size, and throttle rate for various applications, taking into account a number of engine-related variables.

There’s more to it when it comes to metering rod carbs like the SmartCarb® and the Lectron® carburetors. Maintaining sufficient air velocity or “signal” at the rod is critically important for fuel pickup and atomization. Any stalling of velocity or weak signal at the metering rod can result in a loss of fuel pickup and poor atomization, translating into hesitation, bogging, or soft throttle response. The SmartCarb® carburetor’s venturi profile is designed to focus airflow directly at the metering rod through the entire throttle range in order to maximize signal and promote fuel atomization. A circular venturi shape is not optimized for this purpose and as a result is more prone to suffer from weak signal and soft throttle response, particularly down low or just off idle. 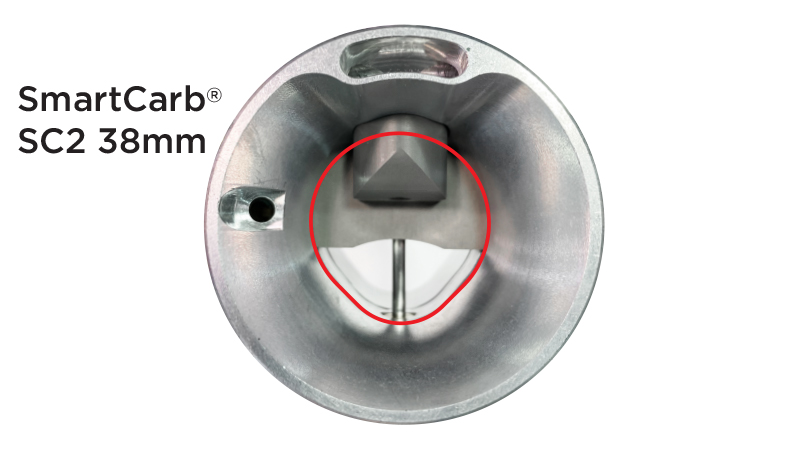 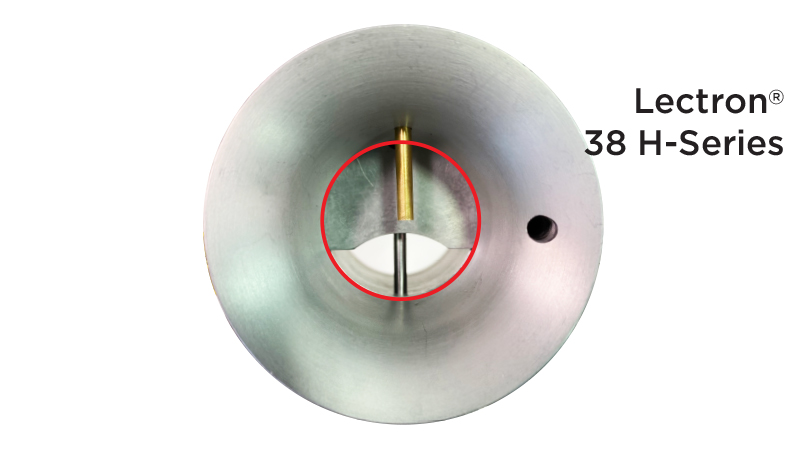 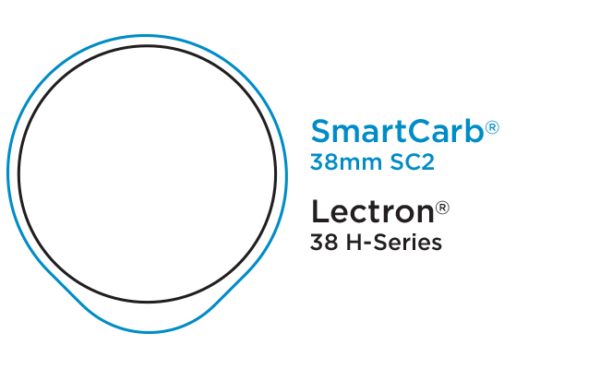 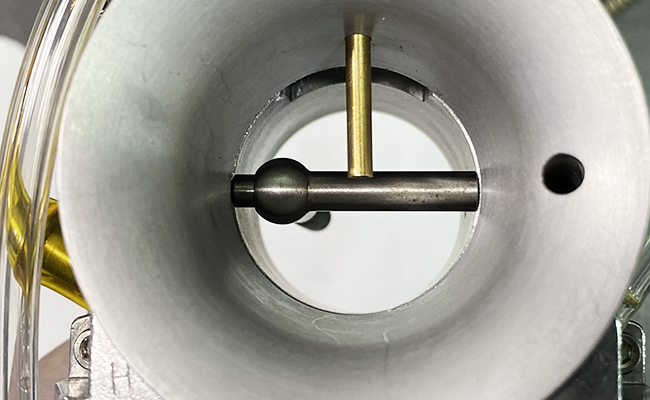 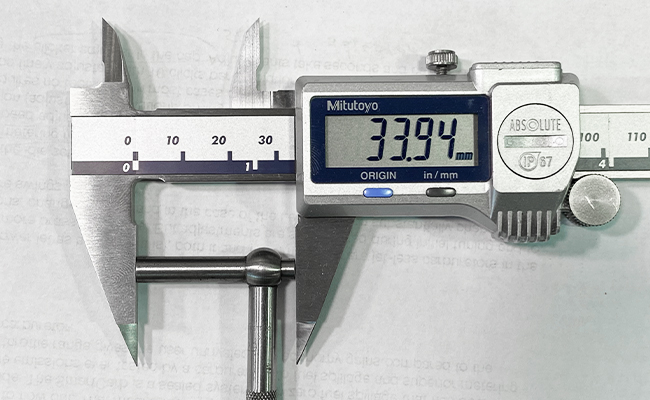 It is important to note that Lectron, LLC appears to have made changes in recent years to improve bottom end throttle response, especially with the latest H-Series model geared toward the off-road market. For example, the 38 H-Series Lectron® carburetor is sleeved down to a 34mm inside diameter just behind the slide. That’s 4mm smaller than the implied 38mm size. Higher velocity yes, but at the expense of top end peak airflow and performance potential when compared to other 38mm size carburetors. The SmartCarb®, with its more advanced venturi shape, offers no such compromises, providing strong, linear throttle response bottom to top and greater peak power potential.

Float bowl style carburetors require float bowl venting to work properly – just ask anyone who has ever had plugged or frozen vent lines. The Lectron® carburetor, like more conventional carbs, vents its float bowl through external vent/overflow hoses that hang down in front of the rear wheel. The SmartCarb® vents its float bowl quite differently – from inside the airbox via a scoop/port located in the top of the venturi bell.

This patented internal venting feature allows the SmartCarb® to compensate for a wider range of air densities compared to other carburetors. Recent testing proves air/fuel mixture consistency up to a simulated 22,000 feet on drone engine applications, for example.

Venting and airflow communication between the airbox and the float bowl applies a steady, equalized pressure against the fuel in the bowl that is proportional to air density and also velocity inside of the airbox. Put simply, more dense, heavier air drives more fuel flow, less dense air drives less fuel flow, and air/fuel ratios stay consistent regardless of elevation or temperature changes.

Beyond improved air density compensation, internal float bowl venting also provides for sufficient top end fueling in the SmartCarb® without the need for a power jet. Although the original Lectron® carburetor of 1974 did not have a power jet, all modern iterations of the design come with at least one or more power jets to provide additional fuel to the mix from mid to top. 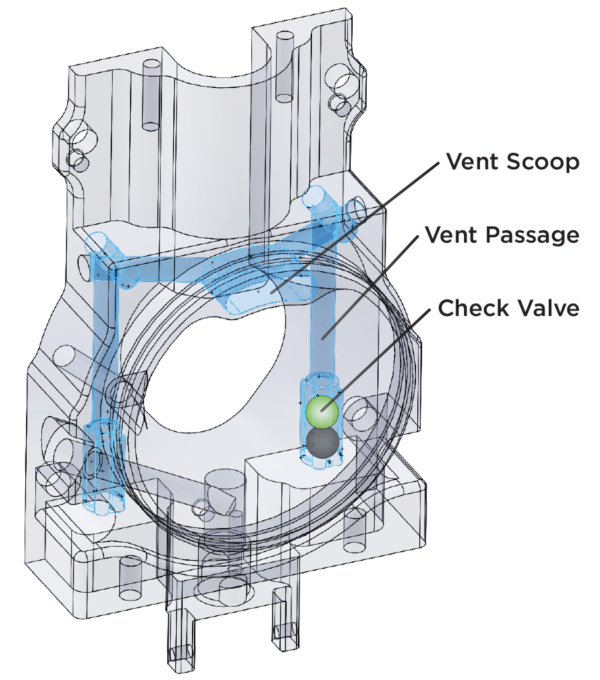 Where does the fuel go in the SmartCarb?

Fuel in the SmartCarb® carburetor’s float bowl stays in the float bowl. One-way check valves in the vent passages allow air to flow into the bowl but they do not allow fuel to flow out. That means fuel remains in the bowl on steep downhills and even if/when the bike is laid down. The SmartCarb® is a sealed fuel system with zero fuel spillage that has been EPA certified with the lowest evaporative emissions ever tested by a carburetor fuel system. Zero fuel spillage and superior, single circuit metering rod atomization through the entire throttle range gives the SmartCarb® user unrivaled fuel economy gains and emissions reductions compared to the Lectron® carburetor or any other conventional carburetor.

Unless you count the Lectron® carburetor’s power jet as a jet (and it is), both it and the SmartCarb® are jet-less in the traditional sense. That means no more brass to change either way! Adjustments are typically required during initial tuning and to accommodate engine modifications or when changing fuel selection.

Conversely, changing the position of the metering rod in the SmartCarb® is done externally, by hand, and from the seat of the bike in most cases. The SmartCarb® carburetor’s metering rod can be more finely adjusted with 10 clicks/positions per revolution by shutting the engine off, opening the throttle to wide open, and using the clicker adjuster in the cap. Adjustments take seconds and can be done while the engine and pipe stay up to temp. 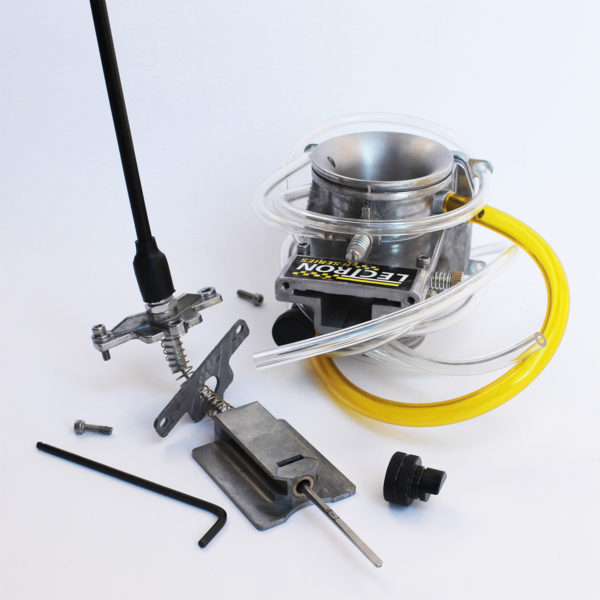 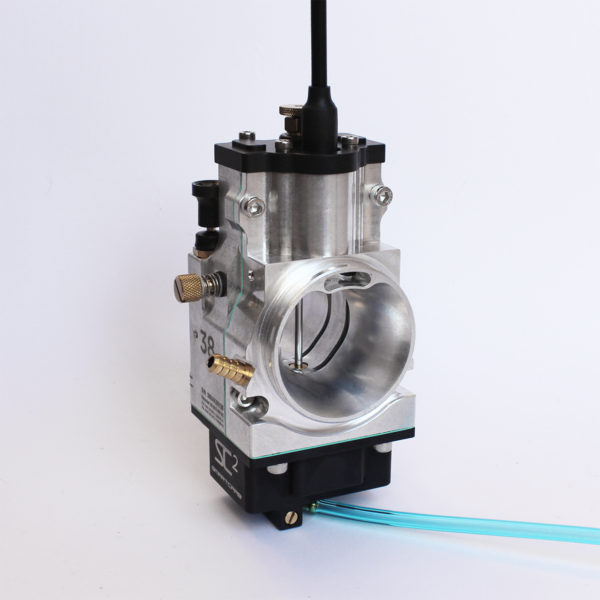 With both the SmartCarb® and the Lectron® carburetors, metering rod adjustments will primarily affect the bottom end or the low speed. Metering rod mixture adjustments in the mid to top of the throttle range typically require swapping out the metering rod for one with a different grind profile, depending on fueling requirements. Both companies offer a variety of different metering rods for the fueling needs of various applications and can advise their customers regarding metering rod selection and tuning baselines.

The SC2 model SmartCarb® and H-Series Lectron® carburetors are designed for use in modern 2-stroke dirt bikes and similar applications using the Keihin PWK or Mikuni TMX stock, however their build quality and manner of construction differ in a few notable ways that affect their appearance, compatibility, durability, and ease of use.

The cast aluminum H-Series Lectron® carburetor, based on a much older design, presents a few issues when used in modern applications including:

All of this means the fit in some bikes can be tricky (for example, Lectron, LLC recommends the use of the shorter XC-W or TE intake flange with the HV or H-Series models when installed into 2017 or later KTMs or Huskies). The stock throttle cable and handset must be replaced with ones provided by Lectron, LLC in most applications and the use of 3D ignition mapping, Beta oil injection, or aftermarket CDIs requiring TPS isn’t an option. 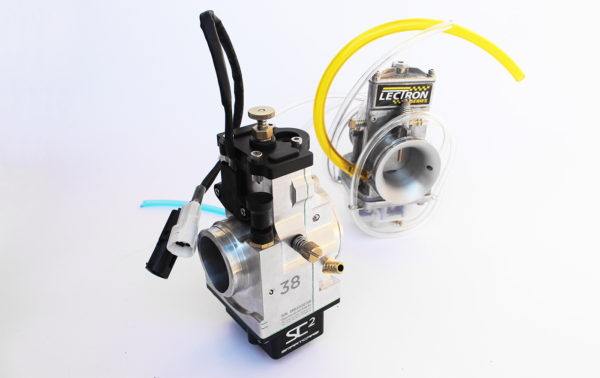 The SC2 SmartCarb® carburetor is designed with the future in mind and is capable of meeting the performance needs and emissions requirements of the rapidly changing off-road powersports industry. They are fully CNC machined for precise tolerancing and increased durability, accept all modern stock throttle cables, and TPS is a factory option or user installable at any time. 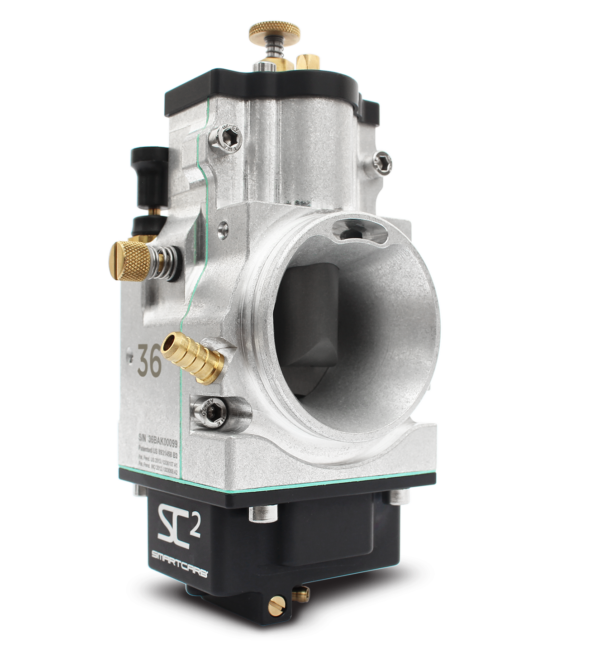 Which one is right for you?

The choice is ultimately up to you. Our hope is that this article sheds some light on the history of these revolutionary fuel systems and that it offers a clear and concise explanation about their differences. Knowledge is power and an informed decision is a smart decision.

Stay tuned for a comparison video coming soon to our new YouTube Channel!

Looking to Elevate Your Ride?